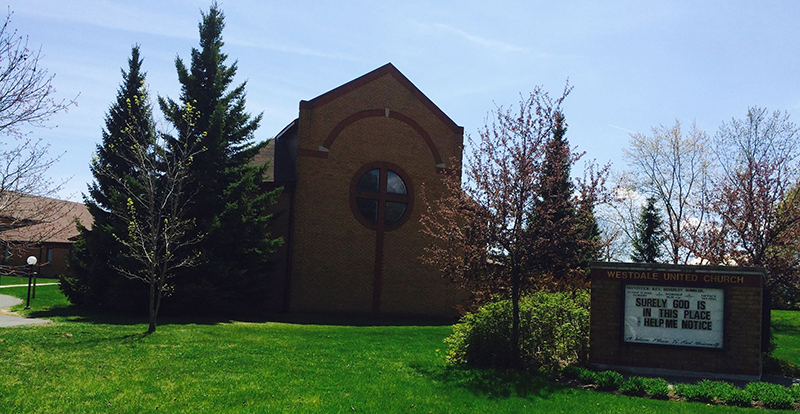 From Easter 1982 until the end of June 1982 Rev. Barry Day of Trinity, Mrs. Josephine Mewett (a member of his congregation) and Mrs. Diana McLeod, Trinity’s organist, conducted Services in the Kawartha Heights school, also assisting were six couples who lived in this area.

This pilot project was successful and it appeared that there was sufficient interest to warrant a “mission project". With the approval of Peterborough Presbytery and under the supervision of Rev. Cameron Reid planning meetings were held over the summer months.

During these meetings the name was chosen, the services of a retired minister, Rev. Frank Whiteley, were obtained, the school auditorium (for worship) and one classroom (for a nursery) were rented for the following year.

The first service was held the Sunday after Labour Day, 1982. The congregation was constituted on February 27, 1983 with 101 members. The land for the church was purchased in February 1984.

In June 1987 construction started, with work crews from the congregation working along with the construction crews.

The church was officially opened and dedicated January 17, 1988. In June of 1988, Rev. Dan advised the congregation he would be leaving Westdale at the end of August. To allow sufficient time to search for, interview and issue a call for a new minister. Rev. John Sloan was called to serve as an interim minister.

In July 1989, Rev. Joan Henderson, accepted a call and ministered to the congregation until her death in December 1995. Rallying from the trauma of this sad experience, the congregation was served during the months of January to October 1996 by Rev. Bradley Weeks and the Rev. Louise Graves. In November of that year, Rev. Brad covenanted with the congregation to become Westdale’s third full time minister until 2013.  The congregation was served by John MacDonald, layperson, for an interim period from 2011-2014.  Rev. Alan Rush served as Supply Minister during 2014 until the call in January 2015 of full time minister Rev. Beverley Sumbler.  Rev. Bev retired in December 2020 and Rev. Lynda Hodgins became our Supply Minister during 2021 until our current minister, Rev. Chris Matheson answered Westdale's call in September 2021.